BEST PLACES TO VISIT IN INDIA 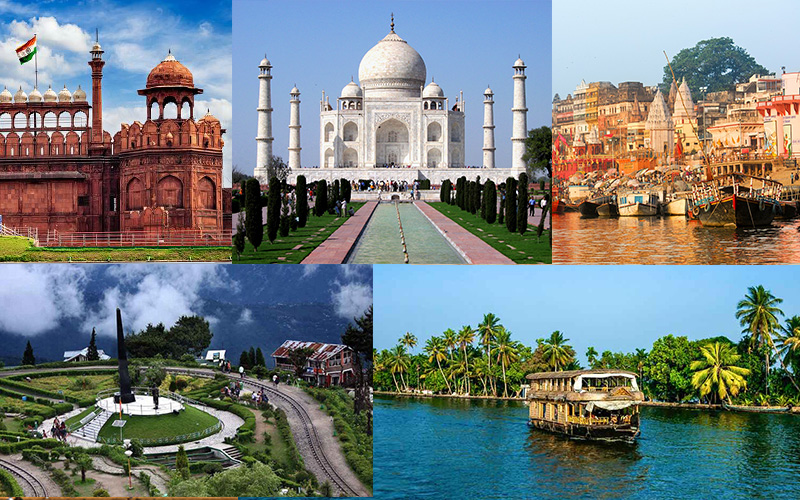 Taj Mahal
One of the Seven Wonders of the Modern World and an enduring Indian icon, the Taj Mahal in Agra was built by Mughal Emperor Shah Jahan in memory of his wife, Mumtaz Mahal. Mumtaz died in 1631, after giving birth to his 14th child. In her dying breath she urged Shah Jahan build a mausoleum for her, more beautiful than any the world had ever seen. In 1632 construction began on the world’s greatest monument to love, which, even today, has no peer.

Varanasi
Varanasi is the holiest city in India and thousands of Hindu pilgrims tour its temples and bathe in the Ganges River to gain religious merit. Take a boat ride on the Ganges at dawn to see scores of people enter the water from the ghats (riverside platforms with steps) to purify themselves before the rising sun. Some perform religious rituals in the water; others go to bathe and swim. While you watch all of this, cremations take place on some of the ghats. Providing the backdrop is an incredible array of temples and ancient buildings, several of them standing at odd angles because their foundations have been eroded unevenly by flood waters. There are 2,000 temples and shrines in Varanasi, including Vishvanatha the holiest and the Durga Temple which is teeming with monkeys so hold onto your valuables!

Jaisalmer
The medieval walled sandstone town of Jaisalmer, that perches dramatically on a flat-topped hill, is exotic, remote and beautiful. Set so deep in the heart of the Thar Desert that one would expect barren near-desolation, this frontier town is today one of Rajasthan’s best-loved tourist destinations. The old fort city rises up just like a giant sandcastle, its ancient streets and alleyways still preserving a traditional way of life. Entry is through a foreboding series of gargantuan gates leading to a long courtyard. Off here are a tangle of alleyways and streets lined with little shops, Jain temples and the old palace of the former ruler, a portion of which is open to the public. Camel safaris in the surrounding desert are a popular activity. In January/February, the Jaisalmer Desert Festival has camel races, folk music, dancing and singing and attracts hoards of colourfully dressed Rajasthanis.

Kochi
With its beautiful lagoons, lakes and greenery, Kochi (formerly known as Cochin) is rightly known as the Queen of the Arabian Sea and perfectly reflects the eclecticism of the state of Kerala. Here in historical Kochi, one can see winding streets with mosques, a 16th century Jewish synagogue, 500-year old Portuguese cottages, old churches and a palace built by the Portuguese and later renovated by in the Flemish style by the Dutch. Fort Cochin boasts St Francis Church – India’s oldest European built church, the Santa Cruz RC Basilica, fine homes built by the wealthy Europeans, Dutch cottages and elegant Chinese fishing nets that grace the northern shores. In the Mattancherry area is the 16th century Mattancherry Palace, also known as the Dutch Palace.

Darjeeling
Sitting at a spectacular altitude of nearly 2200 metres with a backdrop of mighty snow-clad Himalayan peaks and surrounded by verdant tea plantations, the scenic hill-station of Darjeeling offers pleasant respite from India’s oppressive summer heat. The main attractions here include a number of Buddhist monasteries, lush tea plantations, faded relics from the Raj, colourful markets and trekking possibilities in the surrounding area. From mid-April until the end of June, it’s usually possible to see Mount Kanchenjunga, the third-highest mountain on earth, from the city. An entertaining way to reach Darjeeling is on the famous “toy train”, climbing more than 8000 feet over eight hours, along a narrow-gauge track before reaching the city.

Jaipur
A flamboyant showcase of Rajasthani architecture, the vibrant capital of Rajasthan is popularly known as the ‘Pink City’. Jaipur was chosen by Maharaja Jai Singh II (1693-1743) for his capital. A skilled astronomer and visionary, he worked with superb Bengali architect Vidyadhar Bhattacharya to complete the design and construction of Jaipur in less than eight years. The 18th century Jantar Mantar is the largest and best preserved of five observatories built by the astronomer prince. Other must-sees within the city include the City Palace Complex, with its blend of Rajasthani and Mughal architecture. The son of the last maharaja and his family still reside in a wing of the palace.

Goa
Thanks to its picturesque location on the Mandovi River, between the Western Ghats and the Arabian Sea and its large stretch of magnificent, palm tree-lined beaches, Goa is one of India’s hot spots. The state’s Portuguese past is most apparent in its plazas, cathedrals and architecture including the Catholic Church of Old Goa, St. Anne’s Church and the Basilica of Bom Jesus. The surrounding countryside is dotted with luxurious old estates built by wealthy Indians, including Braganza Palace which is open to the public. Lively North Goa has the state capital, Panaji with its interesting churches and buildings. Notable beaches in North Goa include Fort Aguada, Candolim, Calangute and Anjuna, famous for its Wednesday flea market. South Goa is more laid back and beaches here include Bogmalo, Colva and Benaulim.

Amritsar
Holy Amritsar, located in the northwest part of India in the State of Punjab, is the holy centre of the Sikh religion. Amritsar’s main attraction is the revered and beautiful Golden Temple made of white marble, bronze and gold leaf. Maharaja Ranjit Singh built this seat of Sikh religion in 1803. The Golden Temple has four entrances and the walls are inlaid with semi-precious stones in floral patterns, frescoes and glasswork. To enter the temple, one must don a traditional headscarf, wade through a shallow pool as part of a purification ritual, and merge with the mass of bodies that circle the embankment around the holy structure.

Mumbai
Mumbai – or Bombay as it was formerly known, remains India’s city of dreams. Built largely by the British around one of the best-protected natural harbours in the world, Mumbai is India’s strategic economic centre. The city is also is home to the country’s prolific Bollywood film industry, which produces more feature films than any place in the world. The main draw of Mumbai, like much of India, remains its contradictions. In Mumbai, be sure to head to the Gateway of India – a former colonial monument and now a popular emblem of the city and a hubbub of life. Sample bhelpuri (Mumbai’s favourite snack) at Chowpatty Beach along what is known as Marine Drive – one of the city’s most popular promenades. Visit the bazaars of Kalbadevi and Bluleshwar and take a boat trip to the beautiful Elephanta Caves.

Shimla
The largest and most famous of the British hill stations, Shimla is the capital of the state of Himachal Pradesh. Set in the foothills of the Himalayas along a crescent-shaped ridge at an altitude of 2159 metres, it afforded a resort-like atmosphere for the British, so much so that it became the summer capital of British India in 1864. Perhaps one of the most novel ways of getting to Shimla is on the toy train service (completed in 1903) that operates from Kalka. Hauled along by a tiny diesel locomotive, the leisurely journey through stunning scenery takes between 5 – 7 hours. The famous main street of Shimla – The Mall, is lined with stately English-looking houses. Replete with its Victorian-Gothic spire, Christ Church, built in 1846 is Shimla’s most famous landmark.

Things to Know When You...

Best Places to Visit in...

Winter the Perfect Season to...